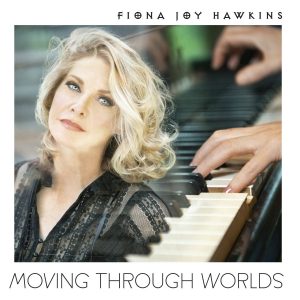 Sometimes reaching for the perfect adjective to capture the impact of a personally soul transporting album can be tricky, so often the term “epic” is a convenient go to that can later, when compared to other even more meaningful works, be reconsidered as in the moment, overstated enthusiasm.

Yet, as in the case of Fiona Joy Hawkins’ latest collection Moving Through Worlds, there are glorious exceptions where it’s not hyperbole in any sense and fits today, tomorrow and for all…let’s just say I can’t imagine there ever being a time in the future when listening to this deeply personal, socially conscious, stylistically expansive 14-track musical narrative would grip me any less than it does today, in the midst of world gone mad 2020.

Produced by Will Ackerman and Tom Eaton, it’s expansive and sweeping in scope, a thoughtful and reflective, introspective and poetic soundtrack to the pianist/composer’s life – and the perfect cap to her remarkable 15 years as a world-renowned new age artist whose discography includes multiple solo works as Fiona Joy and two with the popular genre supergroup FLOW.

By her own admission, it covers 44 years in time, from the two meditative “Aqua” interludes she improvised on the day of recording at Will Ackerman’s Imaginary Road Studios to the haunting, gently rhythmic solo piano number “For The Roses,” which she wrote at age 12 for her grandmother’s funeral.

Moving Through Worlds’ latest single and video is “Calling County Clare,” a hypnotic Celtic dance and exuberant celebration of the connection the Australian based Fiona feels for her ancestors on another continent. All sides of her family trace back to either Ireland or Scotland, so she has always felt a strong Celtic connection and occasionally included those influences in her songs.

Featuring the beautiful, spirited harmonies of Irish Whistle, accordion and guitar and inviting percussion, the track anchors the myriad emotions swirling through the multiple themes of the album that include water, fire, climate change and what she calls “vanishing souls into the wind.” The video, which features stunning natural landscapes and stylized grainy footage of Fiona having wine and dancing on the shore (complete with unique negative images), was shot and edited by The Big Movie Company, with set design by Leanne Prussing. The video beach footage is on Town Beach in Port Macquarie and the drone footage of Ireland Coastline and countryside was done was Bryan Patterson.

As a means towards coming to terms with some demons and difficult issues of the past – which she eloquently presented with rawness and intimacy on recent albums like Story of Ghosts (2018) and Darkness of Light, her 2019 duo project with violinist Rebecca Daniel – Fiona also puts fresh, revitalized creative spins on several previously recorded gems.

These include her atmospheric, lush and lyrical Antarctica homage “Desert of Crystal,” presented with a soft new choral feeling and touches of elegant violin; “Passing of Midnight,” a slowed down, moodier revisit of the lively “Song For Dunnie,” written in tribute to her friend Annette Crossley, who passed away on a full moon right at midnight; and the classically influenced, alternately wistful and whimsical title track “Moving Through Worlds,” which creates a full, violin and strings production around the core solo piano melody Fiona originally presented as “Galloping.” Though we can all relate to the sentiment, her inspiration was the music industry and how challenging it is to keep up with it and survive as a professional musician. That theme takes on a whole new level of poignancy in the age of COVID-19.

While fusing the old and new on these tracks to help her come to terms with the past and “put her ghosts to bed,” Fiona places a dreamy, easy flowing coda on this era of her life with “All I Have Left,” blending piano, violin and flugelhorn to create a final confrontation with these issues – and a sense of hope that she is on her way to healing.

Beyond this personal of healing of wounds, Fiona applies that same urgent energy to the horrific 2019-20 Australian bushfire season, which was known throughout her native country as Black Summer. By March 2020, the fires had burned an estimated 46 million acres, destroyed nearly 6,000 buildings, killed at least 34 people and one billion animals (some endangered species may have been driven to extinction).

In advance of the album, she released four lead singles to raise funds for firefighters and wildlife, knowing that they could do some good in various ways. The first two were “Tolling of the Firebell,” a soulful, increasingly rhythmic impressionistic modern piano piece about the marching and movement of time, with a narrative imbued with cello and English horn; and Chopin’s elegiac “Prelude in E Minor,” titled “Prelude to Fire” for the single release.

The other tracks, released this past spring in Support of Australian Wildlife, include the somber, spirit-swaying “Bushfire Moon,” inspired by a Koala that escaped the fires and was found on a fence next to a friend’s house. A jazz inflected tribute to the animal’s incredible survival, it allows you to feel the seduction of the haunting beauty of the red moon that could be seen amidst the devastation. No explanation is necessary to understand the seriousness and urgency of “Prayer for Rain,” a modern classical piece that draws from Debussy’s impressionism.

“The fires were so horrifying to us all that the only way I could cope and life myself out of the horror was to do something positive,” Fiona says. “You can curl up in a ball or you can do something helpful. The latter avoids falling into the depression trap. As artists we are sensitive and we take on the world around us. My survival instinct is to tackle issues head on and move through them. Sometimes I have to go into those issues in order to come out the other side, and I think that as an overall direction, this is me coming out the other side. I believe music is a gift from another world, from ancestors of the past communicating to inspire and give us hope. Now more than ever we need the connection to our past in order to find the pathway to our future.”